You are here: Home

ขออนุญาตส่งบทความเป็นภาษาอังกฤษที่นำเสนอที่อินเดีย เพิ่งส่งให้เขาเอาไปตีพิมพ์เป็นหนังสือครับ Ancient Stone Beads of South East Asia and Indian Connection (PART 1) (Present at the Short Term Course cum Workshop on History, Science & Technology of STONE BEADS 11 August, 2015 IIT Gandhinagar, INDIA) Bunchar Pongpanich,MD., Buddhadasa Indapanno Archives-BIA and Suthi-Ratana Foundation, Bangkok, Thailand Beads of SEA In the best descriptive work on beads of Southeast Asia, the Jewelry of Southeast Asia (2000, Thames & Hudson Ltd, London), Anne Richter mentioned of Southeast Asia early jewelry consisted of shell pendants, disc beads, and armbands carved from sea shells which are widespread along with finger rings and earrings, pendants and bracelets of stone archaeological found at Non Nok Tha, Ban Kao and Khok Phanom Di in Thailand, Samrong Sen in Cambodia, Gua Cha in northern Malaysia, Timor and Sumba in Indonesia, and in the Tabon caves complex on the island of Palawan in the Philippines. Stone ornaments were generally associated with high status, produced in communities which specialized in manufacture and likely that they were exchanged along the ancient trade routes for other goods of considerable values. Anne Richter also state that those who wore these ornaments three and four thousand years ago might well have attributed symbolic meaning to the substances. The durability and extreme hardness of ornaments may have been thought to preserve the soul of the wearer as rituals gift even imply a belief in life after death and possibly a supernatural realm of ancestral spirits and deities capable of exercising power over the living. Towards the end of the 2nd millennium and during the 1st millennium BCE, she state that expressive figurative form became more common in stone jewelry, the most significant range are found in the jar burials of the Sa Huynh people of southern and central coastal Vietnam associated with the Austronesian-speaking people of island Southeast Asia similar to findings in Taiwan, Hong Kong, the Tabon jar burial complex in the Philippines, and the Niah cave complex in Sarawak on Borneo. These include beads that originated in India suggests the development of more complex patterns of trade and communication. Red carnelian and brownish-black agate beads are thought to have been made in Cambay in Gujarat while Tamil workshops also produced beads of amethyst and agate that were treated chemically and heated to enhance the richness of their colors as well as beads of rock crystal and citrine. Follow by the emergence of Indianized states especially the ancient city excavated at Oc Eo near the Cambodian border thought to have been part of the Indianized kingdom of Funan referred to in Chinese texts when glass and golden ornaments were excelled as well as carved stones, seals and beads. Numerous beads of stone found at Oc Eo, amethyst as well as clear, pink, yellow and milky rock crystals appear to have been made locally. When possible, lapidary workers sought to take advantage of the natural crystalline formations found in quartz, but stone beads were also shaped as simple spheres, ovals, collared spheres, round cubes, plain and faceted bi-cones and plain and faceted cylinders, and cut into stellar forms. It is likely that the conversion of agate into onyx by the process of impregnation with sugar and heating was carried out as well. The existence of unfinished carnelian beads also suggests local processing, rather than importation from India. She mentioned that the stone must have been obtained from elsewhere, however, since there are no known sources in the region. SEA Ancient Stone Beads According to several archaeological works in South East Asia correlate to beads, almost every country both the mainland especially Myanmar, Thailand, Vietnam, Cambodia and Malaysia, and islands of Malaysia, Indonesia and the Philippines, reported not only of beads finding from the very early prehistoric period but also contemporary popular until present. In Ban Don Ta Phet and Khao Sam Kaeo: The Earliest Indian Contacts Re-assessed, Ian C.Glover and Berenice Bellina documented in Early Interactions between South and South East Asia: Reflection on Cross-Cultural Exchange (2011, ISEAS, Singapore) that over 600 hard semi-precious stone beads were found in the three seasons excavation at BDTP (Ban Don Ta Phet) such as agate, carnelian, rock crystal (varieties of siliceous stone) and rarely nephrite with morphologies of spherical, small faceted, cylindrical, barrel shaped, flat hexagonal, tiger claw, comma shaped, geometric faceted with a double pyramid: octahedron, icosaedre, hexagonal and unmodified bear close stylistic and technological similarities with the late prehistoric sites such as KSK (Khao Sam Kaeo), the Sa Huynh sites in central and southern Vietnam such as Giong ca Vo, Gomun and with the Tabon caves in Palawan, Philippines even at Leang Buidane in the Talaud Island of northeastern Indonesia while lion or tiger figurine at BDTP also bear similarity with those found at KSK, Khuan Lukpad and Tha Chana in peninsular Thailand, Lai Nghi near Hoi An in central coastal Vietnam date to the second-first century BCE, near Chansen in Central Thailand, from around Halin and in Ywa Htin and Hnaw Kan (Mandalay division) in Central Myanmar as well as in South China. While the excavation and survey at KSK yield evidence for the manufacture of some siliceous (agate and carnelian) and nephrite ornaments especially beads.

Fig. 1 - 4 Semi-precious stone beads and etched beads and nephrite bi-cephalous ear ornament found from BDTP excavations, National Museum, Bangkok, Thailand. (from The Revitalization of U Thong by DASTA & BIA.) Map 1 The location of sites in Southeast Asia where etched beads and other semi-precious stone beads was reported (from Alkaline Etched Beads in Southeast Asia by Ian C.Glover & Berenice Bellina) Besides from those stone beads, in Alkaline Etched Beads in Southeast Asia, Ian C. Glover and Berenice Bellina also stated in Ornament from the Past: Bead Study After Beck (2003, The Bead Study Trust, London, UK) that over 20-30 years etched beads have been recorded in Southeast Asia where the largest single collection at least 40 etched carnelian and agate beads coming from the 4th century BCE Iron Age cemetery site of BDTP in Kanchanaburi provinces. Others from Banchiang in Northeastern Thailand, Kok Samrong-U Thong and Ban Tung Ketchet-Nakhon Pathom, Lopburi, Nakhon Sawan, Angthong in Central Thailand, Khuan Lukpad and KSK in peninsula Thailand, Giong Ca Vo, Giong Phet, Oc Eo, Long An, Go Hang, Go De and Go Dung in southern Vietnam, Manunggul Cave on Tabon Point, Palawan Island in the Philippines, Leang Buidane Cave on Talaud Island, Plawangan in East Java and Gilimanuk in West Bali, Kuala Selinsing in Malaysia, Taungthaman, Halin, Binneka, Beikthano, Pyay (Sri Ksetra) in Myanmar and some Han period and Dian Culture sites in Yunnan. Ian and Bellina conclude that most of etched bead types found in Southeast Asia can be matched among those from India and Pakistan, especially among the middle period group of Beck's type I and II, belong both to the northern and southern groups of South Asian etched beads. Only two small flat disc beads with radiating lines which are common in peninsular India found in Southeast Asia. Also the barrel-shaped bead with chevron pattern, common in Thailand and Myanmar, is not widespread in India. Thus it is clear that the etched carnelian and agate beads from Southeast Asia are not a typical, or statistically representative sample of South Asian beads. 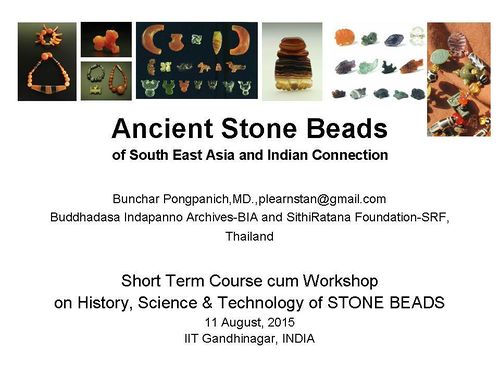 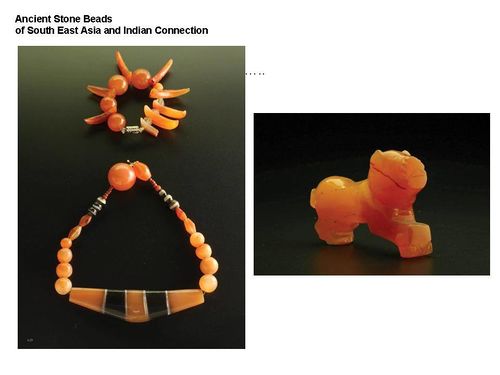 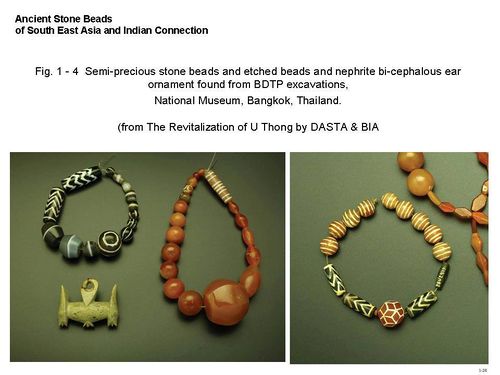 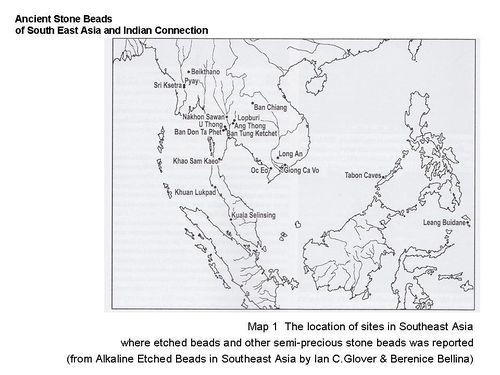